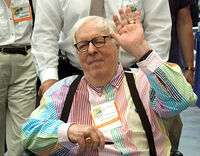 The great author of The Martian Chronicles and Fahrenheit 451 passed away yesterday morning in Los Angeles, at the age of ninety one.

His grandson Danny Karapetian, says of his passing, "If I had to make any statement, it would be how much I love and miss him, and I look forward to hearing everyone's memories about him. He influenced so many artists, writers, teachers, scientists, and it's always really touching and comforting to hear their stories. Your stories. His legacy lives on in his monumental body of books, film, television and theater, but more importantly, in the minds and hearts of anyone who read him, because to read him was to know him. He was the biggest kid I know."

Ray Bradbury will be greatly missed by his family, friends, fans, and by the many authors of his genre who know and respect his work. Please feel free to leave a comment commemorating his life and writings.