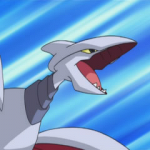 He is not known to evolve to or from any other Boarder.

SkarmorySilver, then known as Andrew, first joined the Internet community sometime in 2010. Little is known about his history prior to that time; some say that he may have lurked around the Internet for the purpose of indulging in his own perverse desires. His first online activity was on deviantART, where he eventually established several accounts in pursuit of his various interests, which ranged from video-games to fantasy creatures to fetishes. In his four turbulent years on dA, Andrew became involved in various deviantART communities in various ways. Different fandoms developed mixed opinions of him; he was hailed as a creative and talented artist in some circles and shunned as an attention-seeking, immature little brat elsewhere. Despite a number of such setbacks, not in the least including the publishing of a very long, harried, and complicated badfic lasting between late 2011 and mid-2012, his experiences on dA were ultimately positive in the long term.

Andrew started college sometime in 2011, earning several degrees in the years since, and left deviantART sometime during mid-2013 in order to open up more time for his academic studies. However, since he felt the need to maintain a personal life on the Internet to avoid succumbing to school stress, he established several Tumblr accounts to compensate, most notably SkarmorySilver, from which he takes his name.

SkarmorySilver first discovered the PPC while looking up examples of Mary Sue Hunters as reference for his own crossover fanfiction. He has since incorporated himself into the community in the hopes of atoning for the mistakes he made in the past both in writing and in his own personality.

He gained Permission on September 3, 2014, upon which he promptly proceeded to dismantle the very badfic he wrote during his time on dA (though with some difficulty, owing to his college thesis taking up most of his schedule). He's proven quite prolific since then despite this, with three RCs under his writer's belt and another kicked off in the late Spring term of 2015.

Retrieved from "https://ppc.fandom.com/wiki/User:SkarmorySilver?oldid=58374"
Community content is available under CC-BY-SA unless otherwise noted.