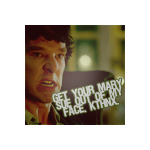 Lily Winterwood discovered fanfiction in fifth grade, when she was doing a report on J.K. Rowling. She promptly became a fanwriter, writing for the computer hard drive and dreaming of online glory as a wonderful writer. These were delusions at first. Like every other fanwriter, she started out with badfic.

In sixth grade, she came across Miss Cam's Official Fanfiction University of Middle-earth. There was a link to the TOS on the website, so she read that as well. It can easily be said that she became a canon fanatic from then on. Lily then went on a OC killing spree in her own fanfic.

Lily joined the Board sometime in June 2008. She is now sometimes known as the creator of DMS Agents Eledhwen Elerossiel and Christianne Shieh as well as DMSE&R Scientists Lori Starrett and Bill Fallis. She is more often recognized as the girl who gives lemming repellent to newbies and an artist.

Fanfic-wise, Lily specializes in mocking Mary Sues and writing crossovers, especially crossover AUs in the Sherlock fandom. She is the writer of the International Academy of Hetalia Fanfiction and the Modern Baker Street Fanfiction Academy, and is responsible for chronicling the events of the 2013 Blackout via the story "Plotholes and Meatloaf and Angels, Oh My!"

Retrieved from "https://ppc.fandom.com/wiki/User:Lily_Winterwood?oldid=46135"
Community content is available under CC-BY-SA unless otherwise noted.