I can be slightly...competitive about things such as Top Ramen versus Maruchan; Coca-Cola versus Pepsi; and the western Zodiac in general. Scorpios only eat Top Ramen and drink nothing but Coke (and water, to stave off dehydration); such is the manner by which the universe marks those destined to rule it.

Also, do not mess with any of the Disney heroines or the works of Tamora Pierce or Tolkien, or I will end you.

Sin'dorei are lovely in the Fall, by the way. Especially the ones with red hair. Yum.

Yes, I am bloody rambling. What will yooou be doing about it, hmm?

Some More Detailed Notes and Observations[]

If you haven't been able to guess by this point, I am highly obsessed with- and defensive protective of the Sin'dorei. Highly. To the point that they are my main reason for initially deciding the Horde had more going for them. The trolls and the tauren also have my profound respect, and these three combined are why I continue to maintain a somewhat indulgent attitude towards the Horde.

Not that I don't like the Alliance - far more personable persons there, if you ask me. But most of the Alliance also haven't been treated like plagues, so the Horde isn't entirely to blame for their "GRAHR KILL ALL ALLIANCE BURN ALL CITIES" tendency. But, the Alliance have the draenei, the Kal'dorei, and the worgen, so they aren't all bad.

Yes, I do indeed have a soft spot for peaceful, rational creatures who are perfectly able and willing to pick up a big hammer/sword/axe and bash skulls if the need should arise. I also possess a maternal streak geared towards arrogant bastards who have recently had the haughty kicked out of them. And neither of these have anything to do with my obsession with long-haired men who do not act like women. Not at all.

Although it is rather charming when a man can go out, kill a bunch of demons, come back and indulge in a bubble bath and braid his hair without batting an eyelash. Just saying.

Varian and Garrosh annoy me. Greatly. As one fanfiction author (who has sadly deleted their account) once said, "Yes, I would very much like to sit Garrosh in a corner and tell him to calm the hell down. Maybe we could stick him in a Barbi Jeep, let him putter around Orgrimmar so the big people get talk in peace. And Varian needs some sort of psychologist or something - maybe a therapist who can say, 'Okay, now let's sit down and come up with a list of constructive things to do when we are upset about the past - other than grabbing your sword and making war on the Horde.'"

And yes, I do play with accents a lot in Real Life. On the Internet, this usually manifests as using a wide variety of idioms and exclamations from all over the world. I like to call it parroting. I also like to giggle at the idea that this may confuse people as to my ethnicity. Tee-hee.

I do so enjoy derailing arguments by spouting nonsense just as the disagreement starts to spike. The reactions very rarely disappoint me.

Yes, I am highly protective of my characters, Eroeda Daywalker and Roahega the dragonhawk. They are my babies. If you hurt them or insult them, I will end you.

Proof of My Picture Obsession[] 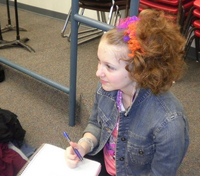 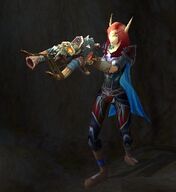 Eroeda proudly modeling her Fury of the Raging Dragon - and killing stuff with it. Yay, wholesale slaughter! 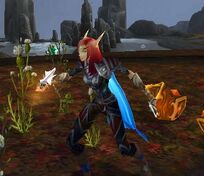 Eroeda valiantly battles a fire elemental with her two daggers: the Azure Lightblade and the Engraved Dagger of the Falcon. 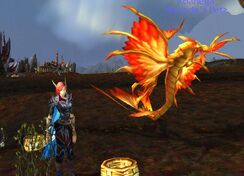 Eroeda and her faithful dragonhawk, Roahega, taking a bit of a breather following the merciless death of a water elemental. 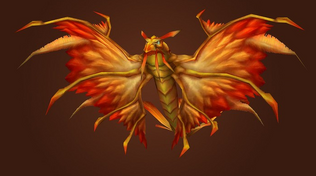 Roahega smiles for the camera! ...Or, at least, I think he's smiling... 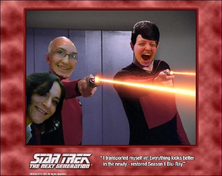 Faces used with permission - though their names are still withheld. (Don't ask why this happened. My friends are Trekkies.) 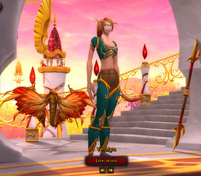 Veralyn as she appears in-game - and as she was before my friend took a hatred for blood elves out on her.
Community content is available under CC-BY-SA unless otherwise noted.