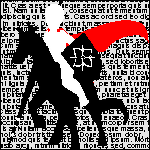 By listening to Keily Shinra

Aster Corbett is a boarder who joined the PPC board in the summer of 2010 as a distraction while waiting for her summer job to give her more data entry. The day that this happened is a day that will live on in infamy.

Aster Corbett is a young person living on the east coast of the United States of America. Currently, she is a journalism major at a university in New York, but lives in Massachusetts.

An avid fan of video gaming and especially Nintendo in particular, Aster Corbett will talk about the Legend of Zelda canon endlessly. Ask to hear her conspiracy theories about the King of Red Lions at your own risk.

Aster Corbett first attempted to write fanfiction at the age thirteen, at which point she was utterly terrible. A small saving grace was that she did not attempt to write her first romance fic until she was seventeen. Although her serious works are not primarily romance-based, she does write some pairings work for a small audience of friends on deviantART. Notable in her time is a writer is her great love for self-insert or anachronistic fiction, finding the antics of somebody trying to survive in a fictional canon absolutely hilarious. Unfortunately, as most of this is a poo slurry in the pit, she rarely leaves satisfied.

Her writing speed varies. At times, it is breakneck, and at others, almost nonexistent.

She very much enjoys a limited amount of realism even in fantasy or science fiction, and is a lover of small details. An easy way to make her angry is to write equestrian activities badly.

Aster Corbett is blunt as a sledgehammer and if you come to her with personal problems, expect her to be brutally honest.

Retrieved from "https://ppc.fandom.com/wiki/User:Aster_Corbett?oldid=44619"
Community content is available under CC-BY-SA unless otherwise noted.