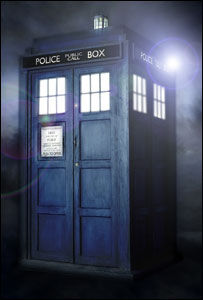 A TARDIS is a time machine originally from Doctor Who. Its name is an acronym for "Time And Relative Dimension(s) In Space." It is a multidimensional vehicle whose interior can be customized. Its exterior changes depending on the time and place it is in, so it may blend in with its surroundings. Sometimes the chameleon circuit that facilitates this change breaks and the TARDIS will remain looking the same way until the problem is fixed.

In some parts of the multiverse, sentient TARDISes are known to exist. None have appeared in HQ yet, but it is probably only a matter of time.

The Doctor's TARDIS is OOC-resistant and aware of PPC agents, because most of the time Sues forget that she is an extremely powerful piece of sufficiently advanced technology and somewhat telepathic. If a Sue has a TARDIS of her own, or the Doctor's TARDIS is Character Replaced, the resulting machine is called a SUEDIS (Suvian Upstaging Exemplar Dimension In Style).

TARDISes in the PPC[]

When the macrovirus epidemic swept through HQ in 2008, each pair or trio of uninfected agents in the field was given a TARDIS, duplicated by DoSAT, to serve as a mobile response center (which has been cited as a key component of Cycle Theory). They were coordinated by the Corkscrew Cattail. Prior to this point, the only TARDISes known to be in HQ belonged to Agent Morgan, the Disentangler, and the Agent. Agent Morgan was reportedly quite annoyed by this development. And by being killed. Again. (The Disentangler was also quite annoyed, but not at the level of Morgan.)

DoSAT has kept this stock of TARDISes for study, and used the information that they gained from them to repair The Doctor's TARDIS during the Blackout several years later. Technicians are also expected to be able to pilot a TARDIS if needed, as part of the PPC's quarantine policy.

Since the end of the emergency, to the relief of those worried about Cycle Theory, it seems most agents have returned to their response centers. Active TARDISes in the PPC now seem to be limited to actual Time Lord agents such as Agent Morgan, the Disentangler, the Agent, the Fisherman, the Aviator, and the Detective.

After Agent Rina Dives stole a TARDIS and ran away, security around the DoSAT TARDISes was increased to prevent a repeat of the incident.

The Cloister Bell is the TARDIS equivalent of the BEEP! that the console uses to alert agents to impending missions.

The Bizarre TARDIS Archives collects images of strange forms that TARDISes have been known to take.