27 chronologically, 17 for all other purposes.

Solvig Sterling is a DIC agent. She's written by Edhelistar.

Solvig is 5’5” tall with an average build. She has neck-length auburn hair and bright blue eyes, and usually wears her black T-shirt with the DIC flash patch and black jeans. Rarely, she will use other clothes, but when she does, she only changes colors. She would use a cape if allowed, though.

Since she was raised by Sues, has little experience with social cues, such as the concepts of shame and personal space. Also, since the Sue-World she comes from had no true consequences, it made her rash and impulsive, gets bored easily and doesn’t think too much before acting, which gets her into trouble. Yet, despite of all of this, she keeps herself cheerful and optimistic, is always curious and willing to learn about everything, and always wants to help everyone.

As a clone of Supergirl, she has the Modern Age Standard Kryptonian Powers, but due to her biological immaturity, has very limited control over her Heat Vision, can’t fly (though she still has limited maneuvering when airborne), and electricity can still bypass her bio-electric aura. Per DC canon, only the Kryptonite from the Main DCU (Earth-1, New Earth and Prime Earth) has a visible negative effect on her, while all other standard weaknesses are unaffected by this continuum restriction. Also, as per Kryptonian standards, her brain works faster and has better memory than most humans.

By the request of Upstairs, Solvig is equipped with a Nanoha-verse Output Limiter in the form of a bracelet, heavily modified and enchanted with indestructibility and a removal-prevention spell by DCUFU faculty member Doctor Fate, which magically locks most of her superhuman abilities, except for her Solar Energy Absorption and Weaknesses. This limiter can only be activated and deactivated by voice command from Department Heads, DIA agents, her FicPsych psychiatrist and/or her assigned partner agent (in that order of priority).

Solvig was "born" as "Project-K," a clone of the DCU-New Earth Supergirl with a cloning mistake that caused her to have Zor-El’s hair color; in an AU populated mostly by Sues (due to this, she is allergic to glitter and has to be under constant treatment with Logicillin and Anti-Lustin). Upon being "rescued" from the lab by the Sue inhabitants, she was named "Kryptogirl" and was raised into a teen superhero in a Generic City, before the AU imploded by an unknown force and she was expelled to the Limbo between Universes.

Years later, she was found floating in Limbo and nicknamed "Katya” by two DIAU agents, who had received an old outdated Intelligence report by mistake, and brought to PPC HQ. There she was taken to Medical, where their tests found her as a Kryptonian and―at the Flowers' insistence―they placed on her wrist an Output Limiter. Later, she was led to FicPsych for therapy, where her therapist named her "Solvig Karinsdotter." She currently lives in the Nursery and regularly trains her powers in a Danger Room located in DoSAT, T&A Division, awaiting her time to be declared ready for recruitment.

Her birthday date is May 22, or so she claims.

She has a pet Charmander called Lizzie. 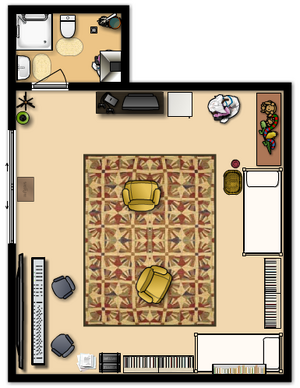 Retrieved from "https://ppc.fandom.com/wiki/Solvig_Karinsdotter?oldid=55957"
Community content is available under CC-BY-SA unless otherwise noted.