MST3K, The Lord of the Rings, Doctor Who, Jeeves and Wooster, cheesy old thrillers

None – he likes to think he's too mature for that

Prefers modern weapons such as guns, but has had the standard PPC basic training in many weapon types.

Not to be confused with Sean or Sean Dark.

Sean Bellman is an agent in the Department of Mary Sues. He is written by Pippa's Ghost.

Sean is well built and muscular. He has brown eyes, and short-cropped, dark curly hair. He usually has some designer stubble on his jaw.

Rather bitter and cynical. He'll always be the one to see the worst in a situation, especially in a fic. So naturally he gets teamed with more optimistic, easy-going partners – usually rookies who haven't been in the PPC long enough to lose their sense of wonder.

He still likes to work out to get rid of his stress, usually accompanied by loud heavy metal. (He doesn’t actually like heavy metal, but he finds it’s great for working out to.) His current partner, Hild, is one of the few people who doesn’t mind the smell of his sweat following a workout.

He dislikes being reminded of the potato incident (see below), bland lager, raw tomatoes, people asking if he's Luxury's ex-boyfriend Sean, and people asking if his name is anything to do with the Bellman in Jasper Fforde's novels.

Sean worked as a reader for a small publishing company, vetting unsolicited manuscripts from the slush pile. As most of them were, to put it bluntly, rubbish, he tended to get very angry and work out a lot of his frustration in the gym afterwards. One day he finally snapped, ran through the offices screaming, beat up one of his colleagues, and locked himself in the company’s toilets yelling, "I'm a potato! I'm a potato!"

Finding a new job was hard, especially since his old employers refused to give him any references. Then he saw the advert in the paper. Someone was looking for employees who hated bad writing, were in good physical shape, and "complete sanity not required." He applied and got the job. 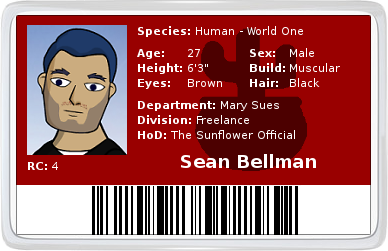 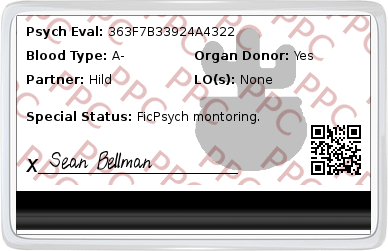 ID card made by the wonderful Neshomeh.

Retrieved from "https://ppc.fandom.com/wiki/Sean_Bellman?oldid=61189"
Community content is available under CC-BY-SA unless otherwise noted.