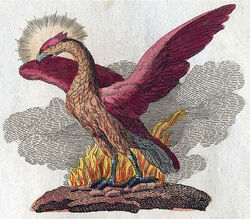 A phoenix is a (supposedly) mythical creature: a bird with beautiful red and gold feathers that lives for a few hundred years before building itself a nest and spontaneously combusting. It is then reborn from the ashes as a baby phoenix or a phoenix egg, depending on the phoenix in question. It has amazing regenerative capabilities, and its tears are capable of healing people of even fatal injuries.

The word is often misspelled as 'pheonix'.

One of the most well-known phoenixes in current literature is Fawkes, the companion of Albus Dumbledore, from the Harry Potter continuum. He aided Harry, the protagonist, in fighting and defeating a basilisk, including healing the boy when he managed to get a highly venomous fang through his arm.

Retrieved from "https://ppc.fandom.com/wiki/Phoenix?oldid=56756"
Community content is available under CC-BY-SA unless otherwise noted.