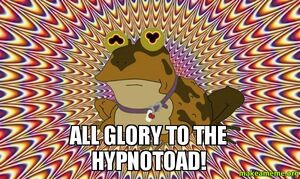 Hypnosis is the ability to control someone using the power of suggestion. Hypnotists are purported to be able to help people block or unblock memories, regress to earlier lives, or wander around clucking like chickens.

In Real Life, hypnosis is merely a state of extreme suggestibility, not mind control, and someone who is hypnotised is unlikely to do anything they would refuse to do when awake. Stage hypnosis where people are made to cluck like chickens works on the principle that the volunteer expected to be told to do something silly on stage and was willing to go along with it in the first place.

In badfic, hypnosis is sometimes used to compel characters to do things they wouldn't ordinarily do, such as commit rape, fall in love with someone inappropriate, or wander around clucking like a chicken. This may be charge-worthy if hypnotism is presented as supernaturally powerful in a continuum without supernatural powers, but exceptions must be made in canons that allow for it.

In some continua, hypnosis is a magical or psychic ability with which the hypnotist can implant suggestions directly into their target's mind. It often requires steady eye-contact with the target. A particularly potent example is the transfixing gaze of Middle-earth dragons such as Glaurung. Looking directly into a dragon's eyes puts you under its spell, and then it can do anything from convincing you that a bad idea is a good one to making you forget your entire life. Another example is Redwall's Ublaz Mad Eyes, who can control beasts such as monitor lizards and snakes and once compelled a follower who knew too much to throw himself out of an upper-floor window.

Retrieved from "https://ppc.fandom.com/wiki/Hypnosis?oldid=54419"
Community content is available under CC-BY-SA unless otherwise noted.