Human (Dunlending, but with some Rohirrim ancestry)

Lord of the Rings, Doctor Who

Boromir (although she strongly denies that he’s her lust object), trying new experiences, Baroque music, the smell of sweat

Knives and bow, but has had the standard PPC basic training in many weapon types

Hild is an agent in the Department of Mary Sues. She is written by Pippa's Ghost.

Hild is of medium hight. She has dark grey eyes and blonde hair, usually worn up in a messy bun.

She's optimistic, full of excitement and wonder about this new life, not having been in the PPC long enough to start getting cynical about it. Despite this, she's still a hardened, experienced warrior, and won't hesitate to fight someone if necessary.

One aspect of modern life that she's having trouble getting used to is hygiene. Coming from a semi-nomadic bandit tribe who washed once every few days in the river, she sometimes forgets that she's supposed to wash herself every day now.

She dislikes being called “Hilda,” and people assuming that she speaks Elvish languages just because she’s from Arda.

She's a semi-fic blip chracter, from an unwritten Boromance in which she was a member of a group of Dunlending bandits who captured Boromir at Tharbad on his way to Imladris. Assigned to watch over Boromir while they planned to ransom him, Hild found herself getting to know him, and slowly starting to feel affection for him. She eventually helped him escape, giving her life to help him get away.

But since her fic was never written, she ended up slipping through a plothole, and ending up in HQ. She was cured of her borderline Sueness and trained as an agent. Her weapon skills from her bandit life meant she became an assassin in the DMS.

She has recently adopted Gieves, the mini-Jeeves found by Sarah Katherine Squall in "Knightfail". 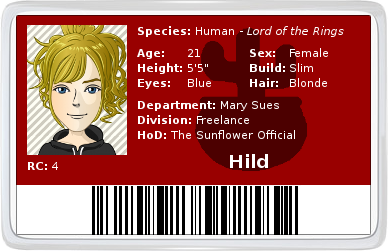 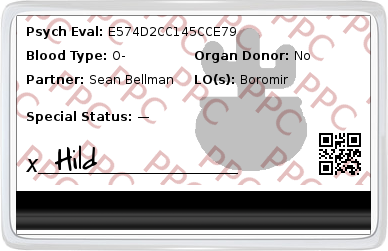 ID card made by the wondeful User:Neshomeh

Retrieved from "https://ppc.fandom.com/wiki/Hild?oldid=52560"
Community content is available under CC-BY-SA unless otherwise noted.