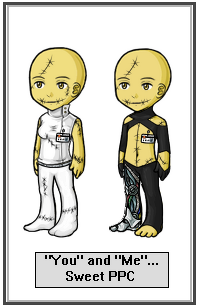 A crash dummy is an inflatable dummy that channels the Sueish spirit of first- or second-person fanfictions. With a dummy, PPC agents can enter such fics without being Sued. Each dummy starts off as a soft yellow cube bearing the instructions "Do not pull cord until in fic." The dummies come in "Me" and "You" varieties, one for first-person and the other for second-person. They are not very durable, so treat them with care.

To use a crash dummy, shove the dummy into the fic first, so that the Sue inhabits the dummy instead of an agent. Crash dummies can be assassinated just like normal Sues; upon death, they turn back into crash dummies and can be folded back into a cube. DoSAT does not take kindly to agents who destroy or lose crash dummies; agents are advised to use assassination strategies that leave the body intact and retrievable, such as the Killing Curse.