The Antigravity Apple is a "larger than life,"[1] floating apple. Where it came from is unknown, but it sounds like something that would happen on the Discworld. Whatever its origin, it is probably a cosmic relative of the apple that is famously purported to have hit Isaac Newton on the head, inspiring him to develop the theory of gravity. Every family has a bad apple... 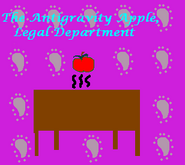